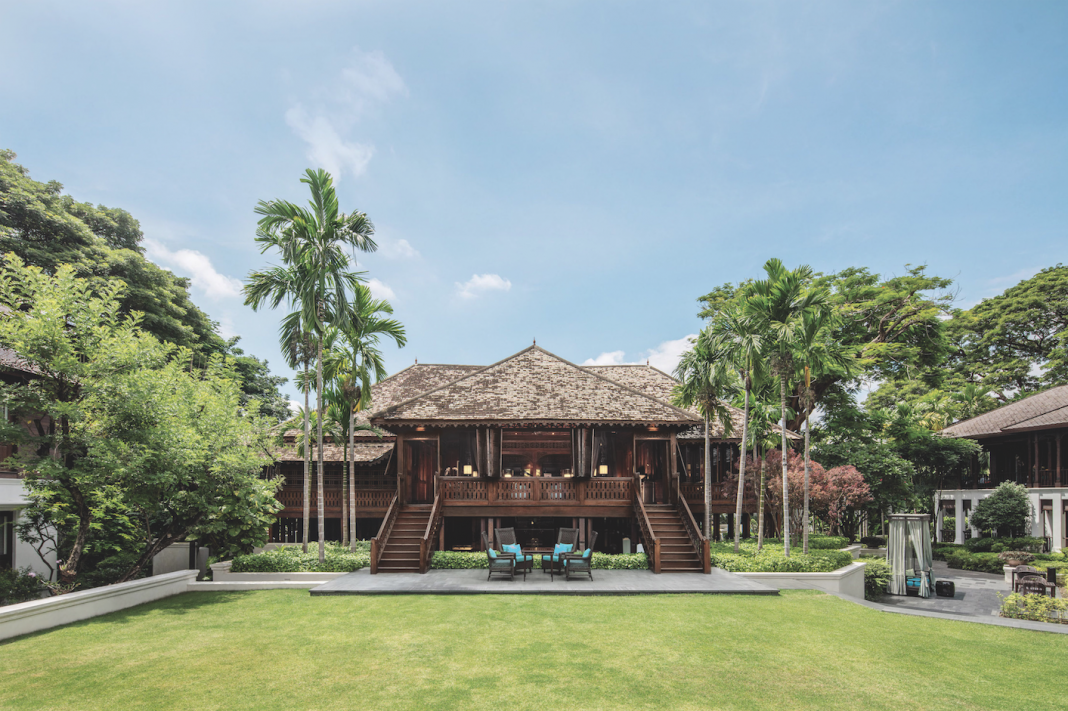 The industry is in the middle of a major makeover with renovation after renovation planned, beginning or ending. Some of the region’s most historical buildings now house hotels and are in the thick of these changes; Chiang Mai’s 137 Pillars House is among the most stunning. Zara Horner takes a look.

Opened in 2012 the award-winning 137 Pillars House in Thailand’s northern city of Chiang Mai is a stunning 30 suite boutique hotel with a rich past.

Built around an original colonial teak homestead which dates back to the late 1800s, it is located in a leafy residential enclave a few minutes’ walk from the historical Watt Gate Temple, Ping River and trendy boutique shopping area.

When purchased by the present owners the house had been neglected and had fallen into disrepair. Frequent flooding, humidity and pest infestation had taken their toll.

A team of architectural historians, conservationists and designers worked meticulously to reinforce the integrity of the original structure creating spaces of tranquility and havens of peace, amidst nostalgic splendour – alongside the latest modern comforts and conveniences
of course. 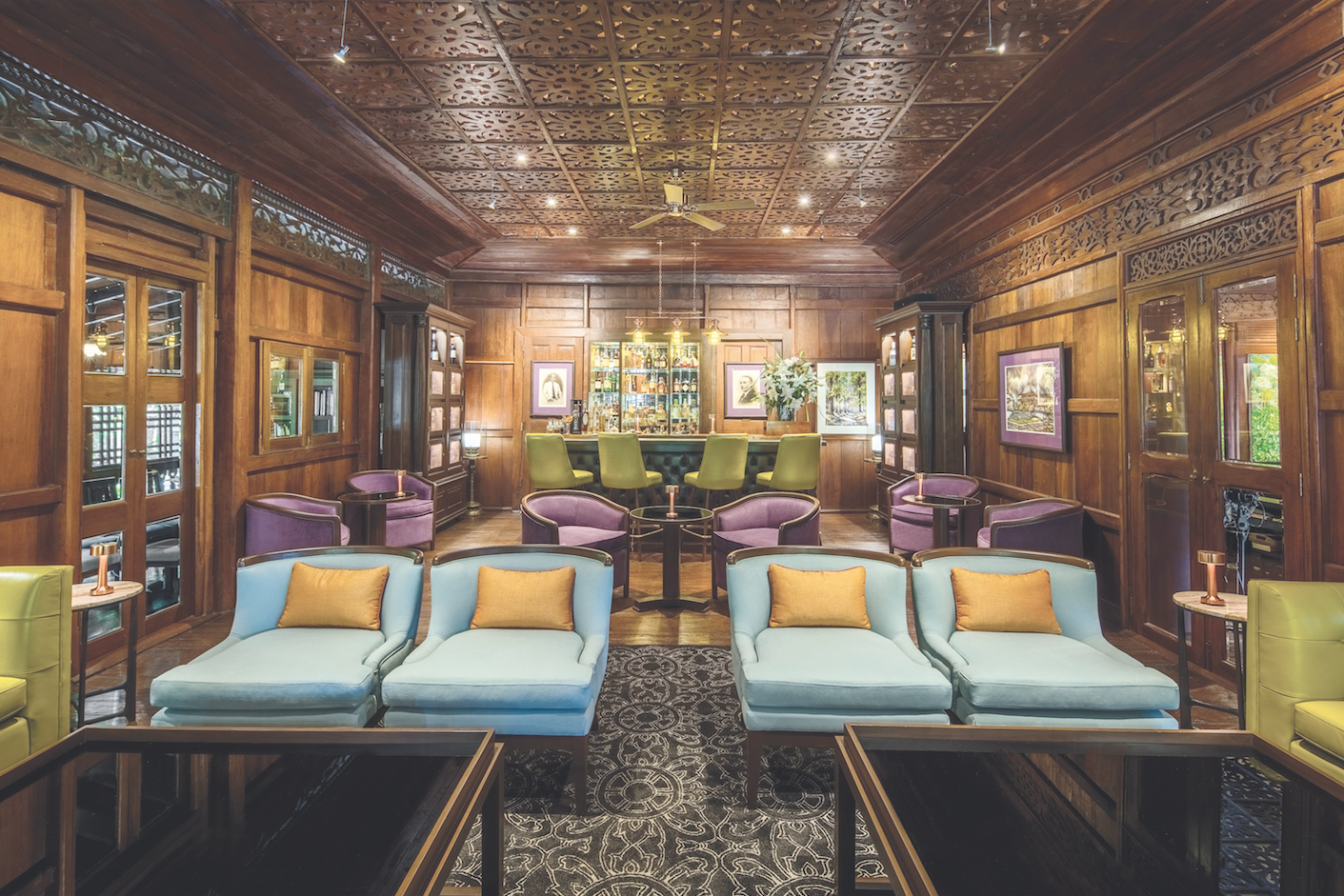 The design concept took inspiration from the site’s cultural, historical and architectural heritage.

Distinct features of the colonial Lanna (ancient Nothern Kingdom) design style such as motifs, construction materials and techniques as well as the ambience and scale of the era have been incorporated throughout the property.

It’s a refined contemporary canvas with design cues from the existing artwork and colour palettes as well as intangible resources such as site orientation and surrounding flora.

As with many such renovations in the region the property design augments the aesthetic nature of the heritage, weaving a narrative and resonating the character of the old building.

A tale to tell

The story behind the building begins in the royal court of King Chulalongkorn, the student of British teacher Anna Leononwens, the story captured in the movie classic ‘The King and I’.

The King permitted foreigners like the men of the Borneo Company to fell trees across the vast teak forests of northern Thailand for commercial purposes.

Anna’s son Louis Leonowens joined the company and as superintendent opened the company’s office in three sprawling teak houses, each with more than 100 teak pillars; a fourth, 137 Pillars House as it is today, was moved over to the company’s land in the foreigner’s enclave and Leonowens briefly lived there. 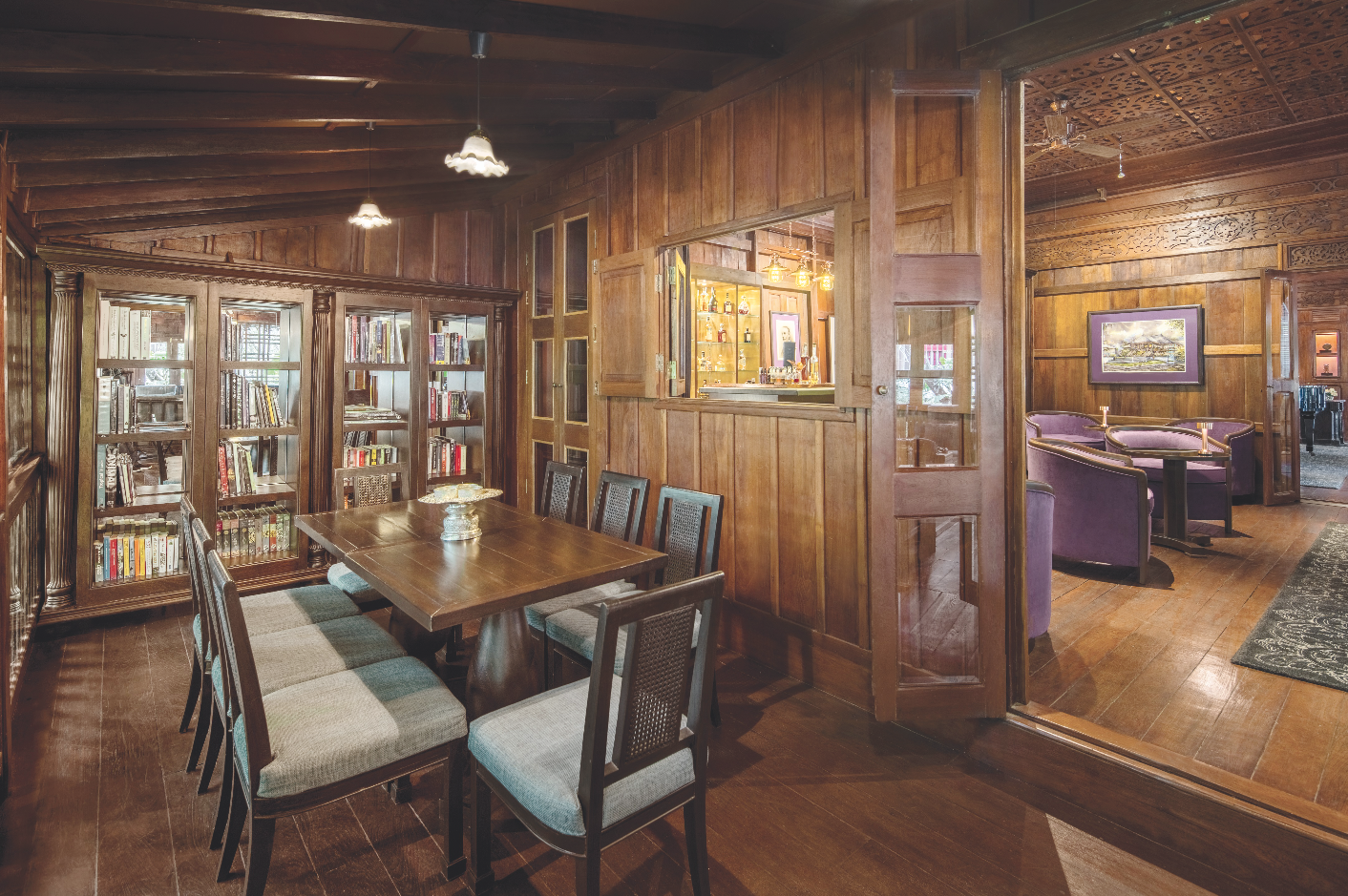 The house remained part of the company’s assets even during the Japanese invasion of Thailand. In the post WWII years the company returned to the region, but sold its Chiang Mai headquarters to William Bain, a Scotsman who had fled his family’s expectations for Chiang Mai.

He married a local Mon girl, and together they raised a family of two daughters and two sons. Son Jack followed in his father’s footsteps by joining the company and raising his own family on the grounds.

A colourful character, Bain’s legend lives on in the bar named after him and is a signature outlet in all 137 Pillars properties.

Reminiscent of a gentleman’s club the bar has “a nostalgic, historical atmosphere that harks back to the golden age
of cocktails.” 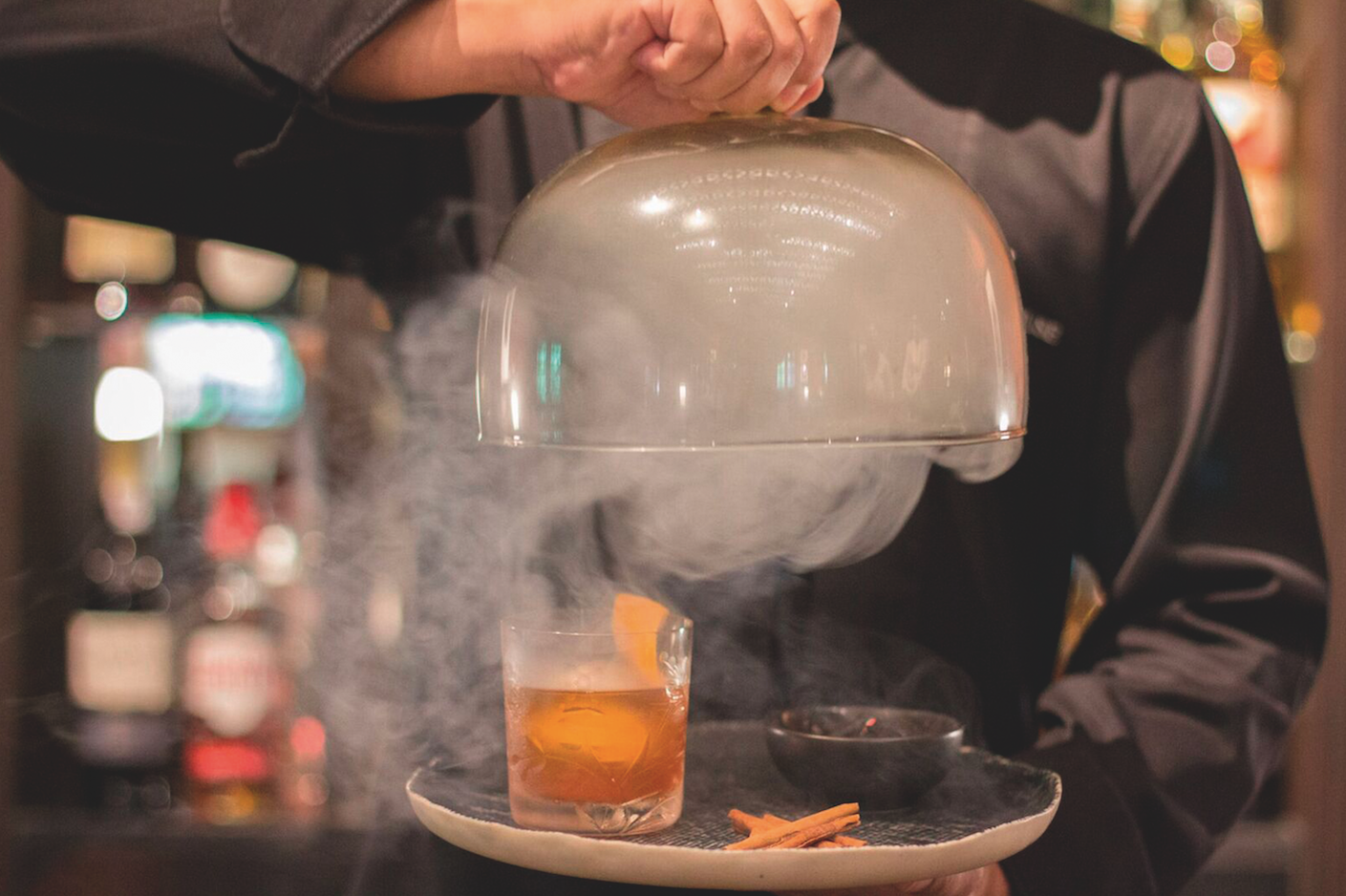 Julian Coombs Associates was the firm commissioned with the bar’s renovation and Anne Arrowsmith, hotel general manager says, “Julian’s sensitivity, hands-on approach and his body of work made the decision an easy one.”

Arrowsmith goes on to explain the reason behind the renovation: “A gap in the market. Bangkok boasts six of Asia’s Top 50 bars, while Chiang Mai, Thailand’s second city lacks a single one. Hence an opportunity for JBB’s to differentiate itself. The opening of JBB Bangkok provided a perfect impetus to ‘raise the bar’
in Chiang Mai.”

It was “essential” the design reflected place, Arrowsmith says. “The teak house is unique and provides the DNA for the hotel and our special approach to hospitality. The space could not be altered and thus the designer needed to interpret the design elements accordingly.” 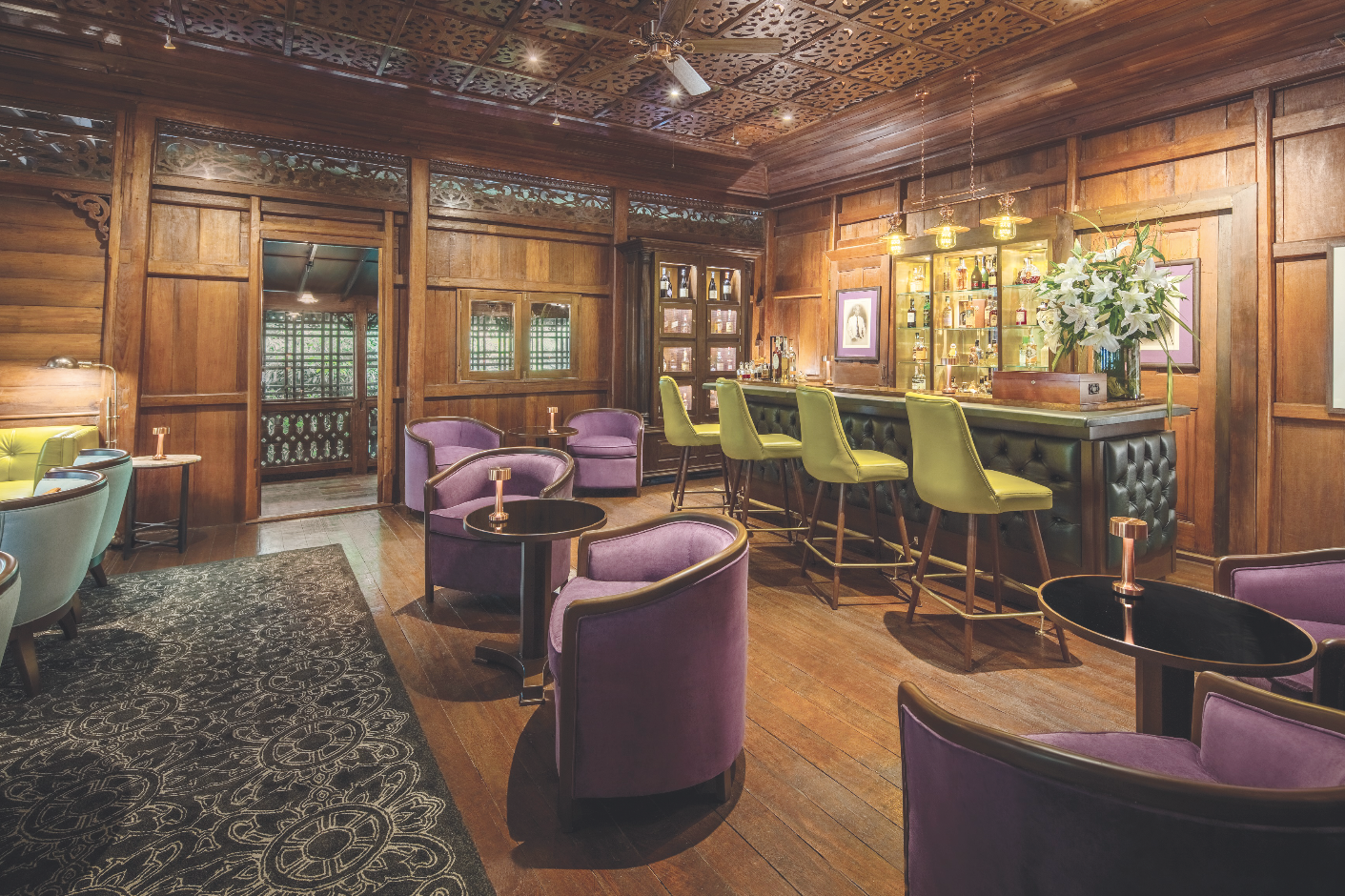 Materials used were selected “to balance, in colour and light, with the richness of the existing aged golden teak architecture, while keeping within the historical aspect of the architecture. Copper and leather, warm and soft respectively, allowed for an intimate experience while gently contrasting the history with a fresh contemporary look.

“The leather buttoned and copper topped bar sets the scene for the house retro cocktail menu.

“It’s all designed to connect the guest to a unique, historical, yet cosy
bar experience.”