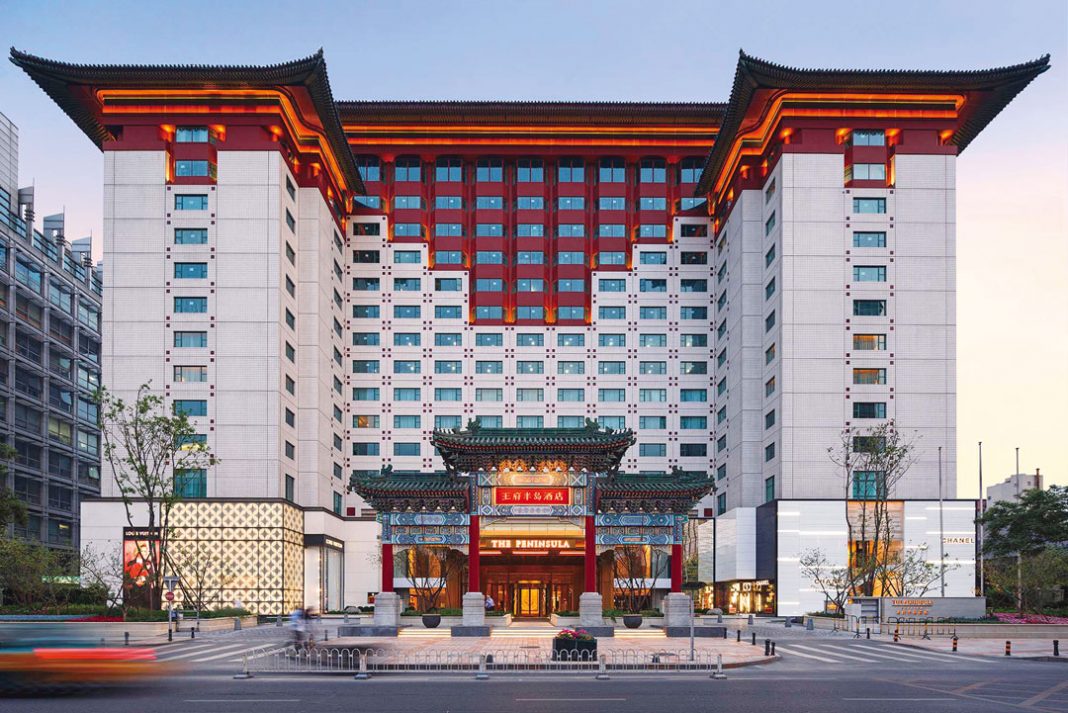 Work on the Peninsula Beijing began in late 2015, with the project completed in phases to keep the hotel operational throughout the renovation. Zara Horner reports on a small part of a project, which is larger than any the group has ever undertaken.

During this massive renovation more than 600 workers were on site during peak construction times, and more than 40 suppliers, designers, artisans, engineers and contractors were involved.

The US$123 million renovation was conceived in 2013 by Hong Kong designer Henry Leung of CAP Atelier.

The design inspiration is informed by the Middle Kingdom’s imperial palaces and gardens and is mindful of preserving local heritage, culture and traditions to create “an authentic sense of destination,” new general manager Vincent Pimont says.

Getting the restaurants right

“The beautifully styled restaurants at The Peninsula Beijing – The Lobby, Jing and Huang Ting – celebrate the unique Chinese heritage of The Peninsula brand and the historic integration of fine craftsmanship into Chinese dining culture,” Pimont explains.

He adds, “new restaurant designs and menus have been created to provide aesthetic and culinary experiences for guests with an emphasis on Chinese art, design, craftsmanship and fine cuisine.”

Right from the start

“The Lobby is the heart of every Peninsula hotel,” Pimont says, “and The Lobby at The Peninsula Beijing presents Chinese culture through the integration of art and design into the monumental space.”

Embellishing the “palatial grandeur” of the space are specially commissioned abstract ink paintings and bronze statues referencing Beijing’s Temples of the Sun and Moon. Echoing the hotel’s location in the heartland of the city’s tea culture two large sculptures of tea drinkers are crafted in bronze – historically the preferred material of China’s master sculptors.

Meanwhile, the new Jing restaurant is a ‘farm-to-table’ venue “with a hint of Mediterranean inspiration in a stylish setting evoking a mystical Chinese garden,” Pimont says.

Again, unique pieces of contemporary Chinese art and design, natural colours and elements such as wood, paper, silk and marble have been used in the design of the space with two three-metre silk-embroidered circular opaque screens dividing diners, “whilst lending an open feel to the environment.”

Each screen features pastoral images on each side using 200 different coloured threads showing the subtle gradation of hues that play with the restaurant lighting through sheer silken backgrounds.

Above the banquettes in the restaurant are glass screens depicting the trees of Beijing, hand-painted in black and coloured inks to evoke Chinese landscape paintings.

Even the tableware has been specially created with European porcelain by Legle and Villeroy & Boch and glassware by Austrian company Zalto. Pimont says, “The plates come in various shapes and sizes and resemble works of art. Each one is unique and all have an organic aesthetic.”

A private dining room for up to 16 people has a unique décor inspired by French chinoiseries from the beginning of the 20th century. “The chic design of the Chefs’ Table room features windows looking into the kitchen so diners can watch as chefs prepare and describe a tailor-made menu served on fine tableware,” Pimont explains.

Integrated into the design of the new restaurant is Jing Bar.

Certainly the history is impressive, as Pimont describes: “the décor features grey brick walls, slate floors, and aged pine, ivory and blue silk highlights a collection of antiques dating from the Qing dynasty (1644 – 1911), to celebrate the traditional elegance of this type of dwelling.

“The restaurant walls are constructed with reclaimed bricks from hutong courtyard houses, dating back several hundreds of years, which were sourced from demolition crews across Beijing. The huang hua li wooden chairs and tables are reproductions of traditional Ming designs (1368 – 1644). The pine floorboards and beams, sourced from a large mansion in Suzhou, near Shanghai, and the heavy wooden front door with its iron handle and studded design are all over 200 years old.”

The restaurant seats 140 and is divided into two areas; a teahouse at the front and the restaurant itself with four private dining rooms.

Reversible embroidered panels from a Qing dynasty imperial robe – gold one side, blue the other – decorate the walls, while the wooden screen is over 100-years-old.

Two smaller private dining rooms can seat up to 12 people, and feature a four panel jade screen dating from the 1920s depicting birds with bamboo, chrysanthemums and plum blossoms, while three small alcove areas have ivory silk curtains for privacy.

Dominating the teahouse is an antique display stand over 200-years-old with an intricately carved roof, sourced from Shanxi province, and used to display Huang Ting’s collection of Chinese teas.

“Additional antique design accents include giant bamboo birdcages and stone window grilles that are several hundred years old from Shanxi,” Pimont points out, “while the entrance is flanked by four stone posts topped by carved lions’ heads. Over 200-years-old, these originated from a Shanxi mansion where horsemen used them to tie up their horses.”

Fung shui elements are also incorporated into Huang Ting’s design, with an interior water feature and waterfall panels, and the ‘jumping fountain’ visible outside the restaurant.

The business of space