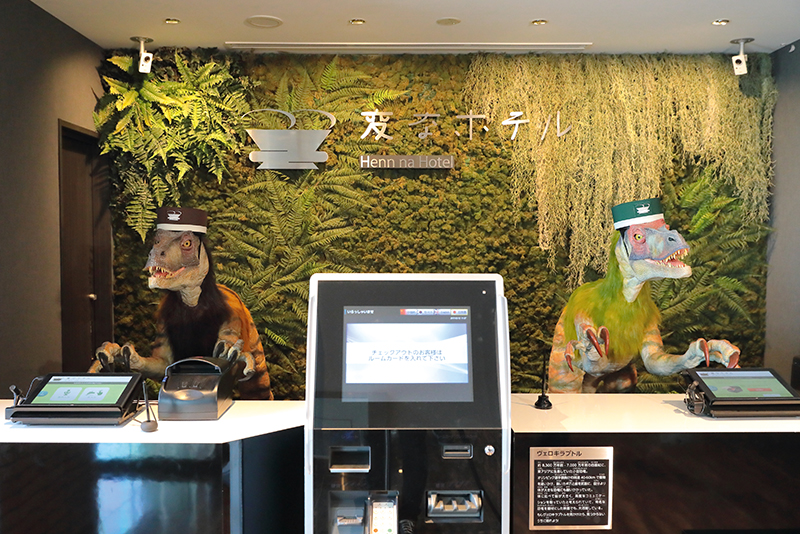 A recent study has found that hoteliers fear a future where their properties are operated by robots, yet at the same they time believe artificial intelligence (AI) may be the key to ensuring a highly personalised guest experience. What is behind the robot invasion in the hospitality industry and what are the latest developments? Donald Gasper talks to some of the pioneers.

The emergence of robots and hi-tech innovation in hospitality is slowly becoming a trend. “In the last two to three years, ‘hospitality robots’ have been slowly making their way into hotels as well as other service-related industries and they are now more than just a novelty,” says Freddy See, director of sales & marketing at Sofitel Singapore City Centre. “These days, robots are used to extend consistent customer-centric services that are both fun and entertaining for guests.”

Sofitel will be utilising two (an)droid butlers named Sophie and Xavier by the end of the first quarter of 2018. Their primary function will be to extend minibar deliveries and services to guestrooms. Aside from these, the hotel will also use two housekeeping i-robots to assist Ambassadors provide back-of-the house services to guests. 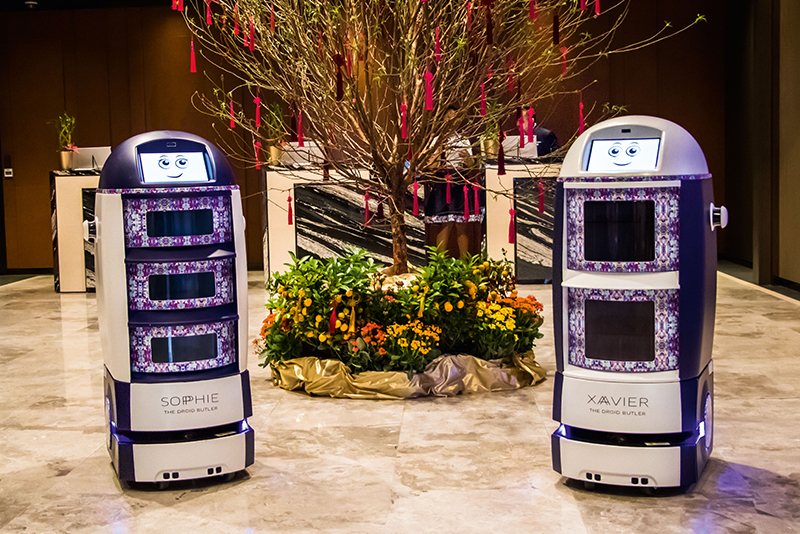 Japan’s Henn-na Hotel (“Weird Hotel”) Maihama, Tokyo Bay, located in the Tokyo Disney Resort, claims to be “the world’s first hotel staffed by robots”. Hideo Sawada, the hotel’s owner, says that his aim was to make it the most efficient in the world by reducing manpower and having robots for 90 per cent of the staff.

The hotel boasts of having 144 robots of all sizes. One hundred of them are in-room communication robots. Others act as receptionists and cleaners or, as is the case with “robot fish”, are purely decorative. 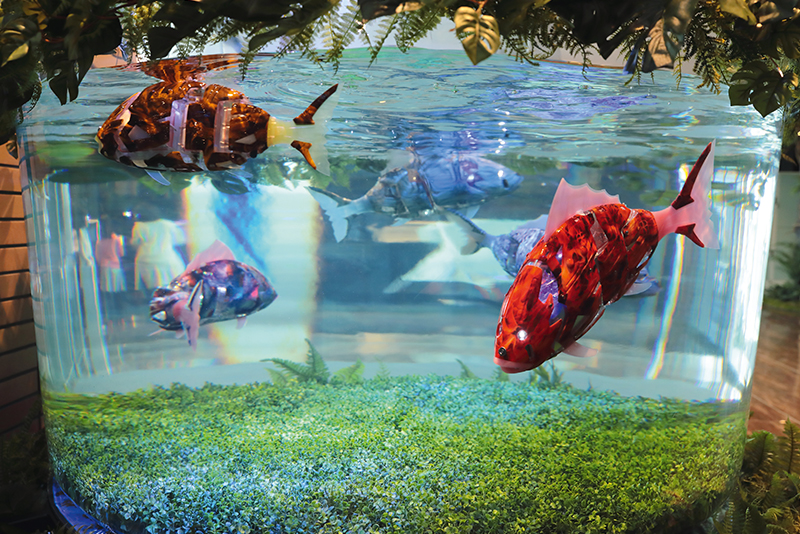 The robots can handle multiple languages, claims Kana Usami, a spokesperson for the hotel. The reception robot can answer in four languages (Japanese, Chinese, Korean and English), so the hotel does not need to hire staff fluent in languages.

“Of course, people-to-people services are of a higher quality,” Usami admits. “However, there are also disadvantages. Humans have feelings.”

“The ultimate ideal is for a hotel to be completely unmanned. But it will be difficult to achieve this because robots are unable to handle emergency response. Robots cannot take responsibility. No matter how technology evolves, the task of taking responsibility cannot be taken away from humans.” 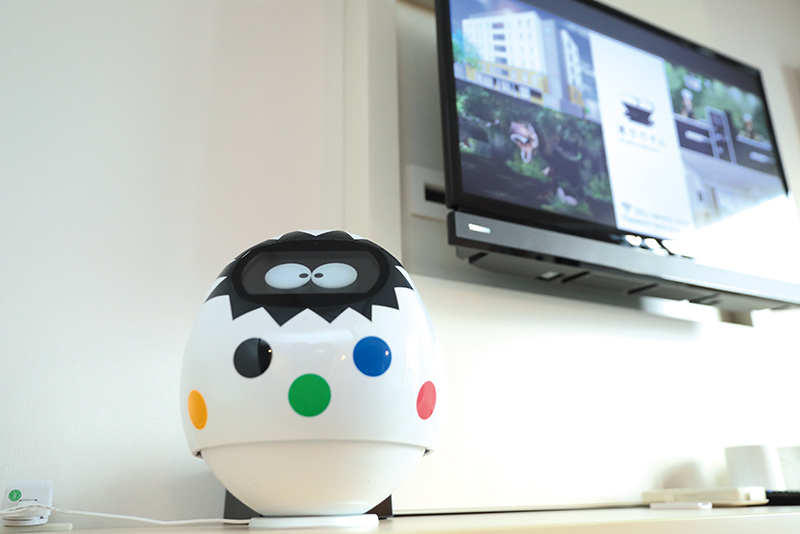 No claims are made concerning the linguistic abilities of the robotic bartender launched by Makr Shakr in 2014 in the Italian city of Turin, the birthplace of Vermouth. “The robot speaks its own special language, that of computers,” Alessandra Savio, a company spokesperson, tells us with a smile. 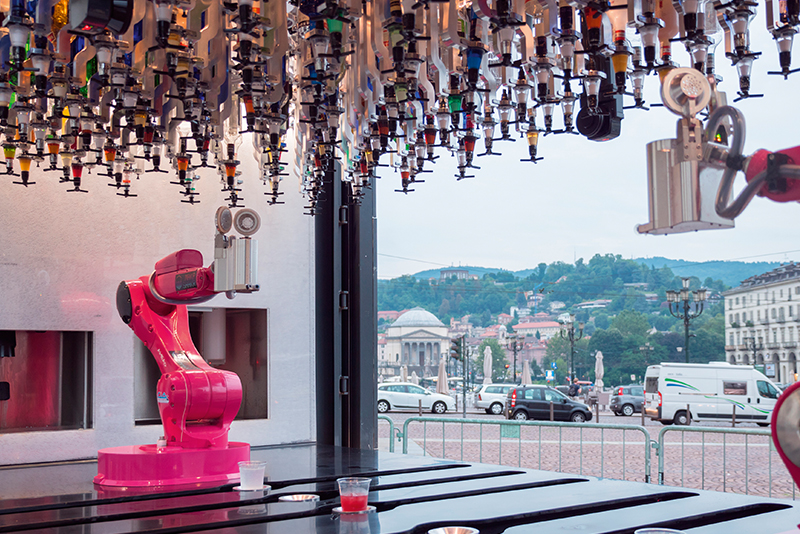 The Makr Shakr bar system was designed by award-winning practice Carlo Ratti Associati, combining futuristic robotics with Italian design. Ratti says that any jobs lost due to the introduction of robot bartenders are offset by the creation of jobs for IT specialists. “The objective of Makr Shakr, an example of AI in the field of restaurants, is not to replace human staff by robots but to make every one of us a bartender,” says Savio.

“Yes, we’ve dabbled with robots,” says Richard Hatter, general manager of Hotel Icon in Hong Kong. The hotel has a robot butler named Jeeves, after the famous P.G. Wodehouse character. “Robots are more than just a publicity stunt,” says Hatter. “Different robotic solutions are used to enhance productivity in both ‘front’ and ‘back of house’ work processes.” 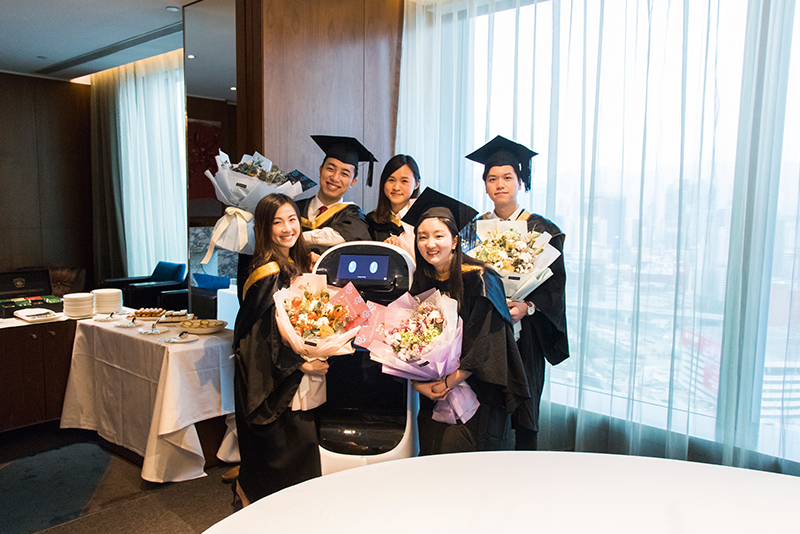 What roles are played by robots in the hotel?

“First, robots are increasingly being used to collect data for analysis,” he explains: As robots perform different tasks, they are able to collect data about guest behaviour and preferences.

“Second, service delivery robots are being utilised as helpers in housekeeping, a physically-demanding department, in the delivery of amenities.

“Third, more advanced e-housekeeping software is being developed to integrate the hotel’s systems to improve both service and staff efficiency. For example, at Icon, our e-housekeeping allows us to monitor real-time information on the cleaning status of each room and inventory forecast.

“Fourth, hotels are testing with voice command technology that will allow guests to control the room temperature and lighting, the TV and other electronic devices in their guest rooms.

“Fifth, the ‘Sharing Economy’: E-commerce companies are coming up with apps that assist with the ups and downs of staffing needs of hotels. The model has taken off in the US and we could see it catching on here, in Asia, as well.”

A recent study published by SiteMinder and IdeaS Revenue Solutions reports that leading hoteliers believe that robots can never replace genuine hospitality. However, they concede that they can decipher big data to learn about guests faster than humans.

“Our study found that 95 per cent of hoteliers are already looking to implement AI within their properties,” says Rachel Grier, Asia-Pacific managing director of IdeaS Revenue Solutions.

Hoteliers surveyed suggested AI could best enhance the guest experience through tailored pricing during the booking process, voice and face recognition upon arrival, and 24/7 customer service during the guests’ stay.

They believe that the future of hospitality should be one that combined technology with the human touch to create an enjoyable but authentic experience.

Ghost Kitchens on the Rise

Making light of it