Home Food The ever expanding cheeseboard 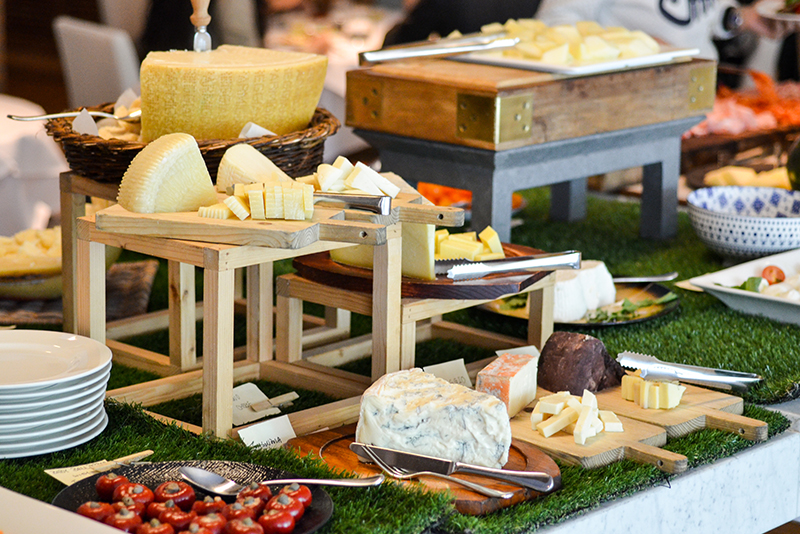 Parallel to the ever-growing demand for heavily processed cheese, however, sophisticated and wealthy Asian diners are increasingly interested in exploring the world of private label, gourmet and artisanal cheeses, writes Jane Ram.

Cheese is a powerful comfort food. For three years as a castaway, Ben Gunn dreamed of, “Cheese, toasted mainly”. This colourful character in Robert Louis Stephenson’s Treasure Island was by no means unique in his craving. Its wide ranging flavours and textures, its versatility and availability give cheese wide-ranging appeal as Asian diners have discovered in recent decades of eating industrial cheese in fast-food versions of hamburgers, pizzas and pastas.

Parallel to the ever-growing demand for heavily processed cheese, however, sophisticated and wealthy Asian diners are increasingly interested in exploring the world of private label, gourmet and artisanal cheeses.

Some dairy raising regions of China have a longstanding cheese tradition as a means of preserving excess milk in times of abundance. Southern China around Shunde, only 47 kilometres West of Guangzhou, produces a special type of cheese-like curd which is preserved in salt. It is made from the rich buffalo milk for which the region is famous. At the other extreme, on the Mongolian steppe, nomads have their own cheese-making heritage. In between, however, cheese is still regarded as a novelty, viewed with some suspicion by older people, although children and young adults are willing to try. Cream cheese, cheddar and mozzarella are the most popular, while cheese-based snacks also appeal to the young and affluent.

Imported cheeses are expensive and import procedures are cumbersome, which has encouraged some entrepreneurs to go the DIY route in meeting local demand for good cheese. From Bangkok to Beijing artisanal cheese makers have been perfecting their skills in recent years, experimenting with new types and flavours of cheese geared to local connoisseurs. Not surprisingly, given the country’s multicultural society, multiple cheese making traditions flourish in Australia. It’s not all good news however as more than one Australian cheese-maker decided that bee-keeping would be less work and more profitable.

“Within about three years I have seen a big increase in interest in cheese, especially among Chinese customers who start to discover and appreciate cheeses from France, Italy and the Netherlands,” says Menad Berkani, Executive Chef, St Regis, Shenzhen. “In Shenzhen we serve an assortment of cheeses on a tray in our all-day dining restaurant, while in our Italian restaurant we have some dishes with Burratta, Mozzarella and other Italian cheeses, which our guests appreciated. In Taiyuan I had a French fine dining restaurant where we served many cheese platters and some recipes with cheese.”

Restaurants like Hong Kong’s Giando are finding new and creative ways to introduce patrons to a variety of cheeses. Chef/Owner Gianni Caprioli is fiercely loyal to Italian artisanal producers of cheese and other products that he personally selects and brings into Hong Kong for his four restaurants and sales outlet. “I am loyal to Italian cheese and I prefer to champion niche, artisanal producers with a history of cheesemaking. The production of cheese has become commercialised in many cases, so when I find traditional makers, I do everything I can to support them. When you indulge in cheese at any of my restaurants, you can be sure that it has been made with the utmost care and attention. I think you can taste the difference.”

The spotlight is on Italian cheeses on the antipasti buffet table at Giando’s newly introduced weekend brunch. “I don’t think people really understand the breadth of Italy’s cheese until they see our selection of over 15 varieties,” says Chef Gianni. “Essentially, you can think of our cheese spread as a regional tour of Italy, from pecorino to taleggio, burrata to gorgonzola. One of my favourite features is our mozzarella selection – we have four or five kinds: classic mozzarella di bufala, bite-size bocconcini and creamy stracciatella.

“Hong Kong diners today have very developed palates and are educated about regionality. We can definitely serve more adventurous cheeses. Ubriaco is very popular with our guests – this cheese is bathed in prosecco along with bi-products such as seeds and leaves, of wine making. It’s a unique taste but people are very open to trying new things these days. I have access to more cheese because I’ve started to import them myself. I’m beginning to use more cheese in desserts, experimenting with a southern Italian take on tiramisu — I’m calling it Buttami a Sud which means ‘throw me to the south’. Instead of mascarpone I use burrata cream — a bi-product of making burrata cheese. The result is a more robust texture and a pleasant savoury note.”

Modern Middle Eastern Master Greg Malouf hails from a different direction, but he is also using more cheese in his dessert recipes. Born and educated in Melbourne, he has won international acclaim for his successful reinterpretation of traditional recipes from Western Asia, including Turkey and Egypt. For the past five years he has been based in Bahrein engaged in wide-ranging food consultancy throughout the Middle East and returning frequently to the Far East, especially Hong Kong, where he has restaurant interests.

These days Malouf says he is increasingly experimenting with new ways with traditional ingredients including cheese. His own Lebanese roots have encouraged him to explore new textures using cheeses in desserts. “Yoghurt cheese, feta and other brine cheeses are all available in Australia and in Bahrein, along with Shanklish, a fermented white cheese of “dry” ricotta. I spice it up with sumac, wild oregano, thyme and chili. My version is usually creamier, but still crumbly. I use stretchy cheeses like Akawi and Kashkaval in desserts. These are popular with diners in Hong Kong who are generally very interested in what I am doing.”

Mohammad Ali Khuni Sofitel’s Regional Executive Chef Greater China hails from Singapore. “Cheese eating in Asia has evolved over the last two years,” he says. “We have Yunnan’s largest cheese room at Sofitel Kunming. Preferences here are more for creamy and lighter cheese – the millennials are more adventurous and they share the same tastes as European cheese eaters. They go for robust old world cheese and blue cheese.”