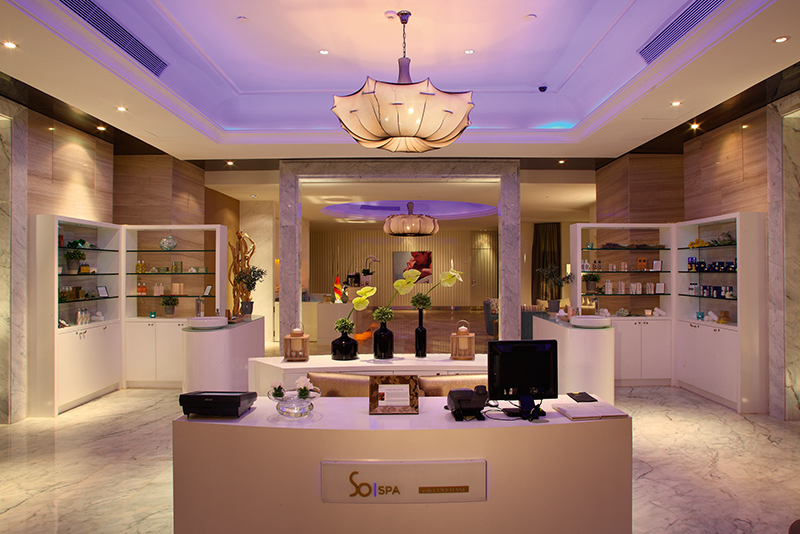 Sofitel Guangzhou Sunrich sets the standard in greater China for its So Spa and So Fit brands with an enchanting blend of French and Chinese flair. Rebecca Lo dives in to learn more.

Sofitel has been long associated with some of the best heritage hotels across the globe. Tranquil terraces overlook the Nile at Sofitel Old Cataract Hotel in Aswan, where Agatha Christie penned Death on the Nile in 1937 and where Mia Farrow starred as the tragic heroine Jackie in the 1978 film based on the mystery. Sofitel Legend Hanoi was the home of Jane Fonda during her infamous tour of Vietnam in 1972 and where Graham Greene was inspired to write The Quiet American in 1951. As the first purpose built Sofitel property to open in mainland China in 2011, Sofitel Guangzhou Sunrich is the flagship hotel in the country for the brand. Despite its lack of historic pedigree, Sofitel Guangzhou more than compensates with a seamless blend of French joie de vivre and Middle Kingdom style throughout its interior spaces. No where is that more apparent than in its wellness facilities: So Spa and So Fit.

Designed by Hong Kong based Joe Cheng of Cheng Chung Design, So Spa boasts 790 square metres and includes a variety of spa and beauty rituals ideal for pampering. So Spa at Sofitel Guangzhou is open both to hotel guests and as a members’ club, with approximately 60% of the former and 40% of the latter as its clientele. “Sofitel Guangzhou is considered a city business hotel,” notes William Chea, Sofitel Guangzhou’s general manager. “About 70% of our guests are business men here during the week. Those who stay over the weekend will be more likely to use the spa. We primarily cater to domestic guests, with 70% from mainland China and the rest from other places including Hong Kong. Of course we host many guests from France and the French diaspora countries, such as Morocco and Algeria.”

“We see hotel guests choosing massages over facials, while members tend to opt for facials,” adds Janet Zheng, assistant manager at So Spa and So Fit. “Guests coming specifically for trade shows such as the Canton Fair will want to unwind after a long day with a deep relaxation massage.” She notes that guests from outside of China are more likely to visit So Spa, and tend to prefer massages. “We don’t really get too many couples seeking treatments together. Instead, the wives of businessmen who accompany them on work trips to Guangzhou will spend a few hours in the spa on their own. They tend to go for treatments such as massages and facials combined with maybe a swim in our indoor pool and some time in the hammam and ice room.”

“Chinese guests have become very exacting in their choice of spas,” Chea observes. “They have travelled a lot and have experience in many luxury hotels. Our guests not only have high expectations when it comes to the treatments, but also how they are greeted upon entering the spa, the facilities’ interior design and even the type of music they hear.”

Sofitel Guangzhou is laid out with So Spa on one side and So Fit on the other side of the 7th level; one entire length facing Guangzhou Main Road Central is devoted to an indoor swimming pool with underwater music, with sun loungers scattered around it and a Jacuzzi to one side. A feature wall of wood grained pentagons and pyramids fitted with recessed colour lighting runs up to the ceiling, creating a striking effect against the glitter of mother of pearl mosaic tiles along the columns and travertine lining the floors. Double height glass windows on two sides offer 270 degree panoramas of the city to the south and west.

The wellness floor features a large reception and lounge featuring glowing fabric clad pendant lamps. A retail area adjacent to the lifts offers So Spa’s signature L’Occitane products used in treatments. White marble floors and travertine walls add to the cool and calm atmosphere, while white pebbles surrounding marble steps mark the transition to the spa and change zones. The male and female change rooms each offer keypad lockers, pine clad saunas and mosaic tiles and marble that echo the finishes in the pool area. It is situated to be easily accessible to the pool, So Spa and So Fit.

So Spa includes six single and one couple treatment rooms; each contains its own separate washroom and shower while the couple’s room offers a Jacuzzi bathtub for two. Clad in white marble, French design touches include a high mirror above the vanity with silver metallic trim. It is flanked by purple fabric covered wall scones to lend a romantic glow. A hint of Chinese influence can be seen in a feature wall within the room with bamboo sandwiches under a transparent sheet, adding texture and tranquility. Heated towel racks more commonly found in Europe make drying off more luxurious.

A series of relaxation rooms enhance the treatment areas, providing guests with further opportunities for balancing mind and body. A round Deep Relaxation Room contains a series of rocking recliners radiating from a Wave Dream device, a Swiss ceiling projection that resembles waves upon a pound. Enveloped by a full height grey curtain for privacy, guests can sip a cup of tea under a soft duvet while resting to relaxing music to prolong their post treatment bliss. Other rooms include a mosaic tile clad hammam, Jacuzzi and 14°C ice room to alternate between hot and cold remedies.

Beauty services offered include a Champagne Nail Bar with three manicure and three pedicure stations that feature OPI products. Magique Hair Salon helps guests and members style their tresses to look their best and can be booked for weddings or other occasions at the hotel. Meanwhile, So Fit includes a separate yoga room, table tennis room and gym with dedicated children’s play corner to keep little ones occupied while parents work out. The yoga and table tennis rooms feature dark hardwood floors while the gym is finished with a brightly coloured patterned carpet.

“Our facilities are very different that the current trend of dark, Southeast Asian inspired spas typically found in China,” states Chea. “It is bright, contemporary and has a modern atmosphere in keeping with our guests’ aspirations.”