To celebrate its 21st birthday, one of Brisbane’s most established hotels has undergone a full renovation. Zara Horner reports.

When planning a trip to Australia most visitors from overseas have pretty much the same ‘to do’ list… Sydney Harbour Bridge, Opera House, Uluru, perhaps a South Australia winery or two and some culture in Victoria, the Great Barrier Reef, ofcourse, and to cuddle a koala.

Even though most intineraries include a trip to Queensland (yes, that is the GBR’s home state, and Australia Zoo’s!) there was a time when a visit to the state capital city hardly featured.

Those days are gone and Brisbane is now very much on the tourist map.

A relatively compact city, Brisbane is easy to get around with a (growing) wealth of cultural, environmental, entertainment and sporting attractions and the big hospitality operators are sitting up and taking notice.

As one of the city’s first luxury properties, Brisbane’s Marriott hotel has snagged itself a prime location.

Sitting on the picturesque Brisbane River, just a stone’s throw away from the city centre as well as some of the most vibrant and exciting entertainment hubs, the hotel opened in 1998. Two decades on, it was time for a revamp. 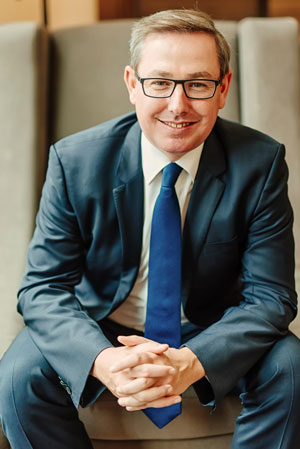 “We underwent a soft refurbishment in 2011,” explains John Douglas, general manager. “That was of the restaurant and guest bathrooms while the meeting rooms were refurbished a year later. We recognised the need for a total renovation in 2018 in light of the fact there are so many new hotels in the Brisbane market now.”

The work started in July 2018, and is expected to be fully complete this month. The hotel has remained open and operational throughout the renovation process.

“This AUD20 million renovation project has seen the transformation of the hotel’s 267 guest rooms and suites,” Douglas points out.

“The Executive Lounge, two floors of event space and our signature restaurant have also been fully renovated with restoration of 7,300sqm of the original, finest quality marbles that have been a design feature of the hotel from the beginning, including Portoro, Rosso Alicante, Filetto Rosso, Botticino Semi and Roso Levanto.

“And, there’s been a big upgrade of the technology efficiencies, for instance in-room air-conditioning.”

Owning company YTL Corporation Berhad has opted for industry-leading Asso Abloy Orion system controls which allow lights and air conditioning to be adjusted from the front desk when guests check in. Sensors on the door and in the room detect movement and when the room is vacant, the temperature returns to a default 21 degrees.

Malaysia-based agency Duoz was briefed by YTL on the project. A self-proclaimed “medium sized practice”, Duoz is responsible for other Marriott make-overs in Sydney and Melbourne, as well as the refurbishment of the Cameron Highlands Resort, Pahang, Malaysia, the Majestic in Malacca, and Thai Airways’ lounges.

“The designers from Duoz have created sophisticated designs and finishes, incorporating what are universally agreed to be elegant colours and fabrics,” Douglas says.

“The design had to reflect the city’s ambience, and Brisbane’s cosmopolitan appeal and enviable lifestyle.”

“We wanted the hotel to be seen as an oasis of understated luxury in the heart of the River City, and that’s exactly what we’ve got.”

Reactions from guests and staff have been overwhelmingly positive, according to Douglas.

“Five of our associates have been employed at the hotel since we opened our doors so the transformation for them is amazing. We have many loyal guests who stay with us regularly and they appreciate the updates.”

Staff numbers throughout the renovation were not compromised either.

“When the restaurant was closed associates were placed in other departments or attended training, product knowledge and team building programmes,” says Douglas.

This year will be a big year for the hotel, and for Brisbane itself, as Douglas explains: “it’s not just what’s happening in the hotel that is exciting, but also the reborn Riverside precinct just a stone’s throw away at Petrie’s Bight. There, the Howard Smith Wharves have been reimagined as a dining and entertainment precinct right under the iconic Story Bridge.

“The long-awaited six year project will be fully complete this month. Locals and visitors are already flocking to The Riverside precinct, which is developing as a world-class destination.

“The newly imagined Brisbane Marriott is perfectly located to take advantage of everything on offer.”

Making light of it