Vegetarian and vegan convictions are also having a growing impact on how we eat. Victoria Burrows on how the diary industry is coping.

The global movement towards health and wellness – both for ourselves and for our planet – is perhaps the biggest evolution in eating and drinking today. Tied in to this, the “free-from” movement, which usually encapsulates gluten, wheat and lactose, has impacted food retailers and restaurants around the world. Vegetarian and vegan convictions are also having a growing impact on how we eat, with plant-based alternatives to meat, egg and dairy products on the rise.

In the face of such pressure, the global dairy industry is developing products that tap into related eating trends: organic products; products that answer to the growing awareness of protein as an essential part of daily diet; and products that eschew the mass-produced for the artisanal and traditional, such as skyr (the Icelandic cultured dairy product), quark (the Slavic and Scandinavian unripened cheese) and labneh (the soft, cream cheese made from strained yoghurt that is popular in Middle Eastern cuisine).

“Consumers are asking a lot of the foods and beverages they consume – they want clean labels, nutritional and fitness-related benefits, convenience, and reduced sodium and sugar – all without sacrificing taste,” says Dalilah Ghazalay, Regional Director for Southeast Asia for the US Dairy Export Council.

But when it comes to Asia, dairy producers say that the market is somewhat different from America and Europe.

Toke Rasmussen, Southeast Asia Director of Arla Foods, an international dairy company owned by 10,300 farmers from across Europe and the world’s largest manufacturer of organic dairy products, says the impact of plant-based dairy alternatives has been low in Asia.

“Our experience is that only China has seen a small development in this matter. We see it as a natural thing that consumers are curious to try out new trends in the market, including plant-based drinks. In general, we find that consumers still prefer dairy in their daily diets,” he says.

China, indeed, is surging ahead with plant-based alternatives, especially in drinks as there is already a tradition of drinking soya milk and a deep mistrust of domestic milk production. Want Want, one of Greater China’s leading food processing companies, recently announced its expansion into soy and other plant-based beverages.

“The organic wave is still new in Asia and is one of the biggest trends within the dairy category,” he says. “We see a growing concern as to sugar intake, and desire for safe and healthy products – especially for infant and family nutrition.”

Ghazalay says that dairy consumption is booming in the Southeast Asian region, especially in processed forms of dairy, such as permeate – a co-product derived from milk that has a concentrated protein content.

She says there has been an uptake in American dairy protein products, whether for “sports and fitness, healthy aging, or weight management”.

“The US dairy industry has been focusing efforts into the production of whey and milk protein ingredients, milk powders and permeates, which are versatile enough to be incorporated into diverse usage applications without taking away the integrity of the flavour,” she says.

“In Southeast Asia, new product launches with permeate has grown at a compound annual growth rate of 15.5 percent from 2012 to 2017. The use of permeate ingredients, which contribute dairy minerals and can reduce sodium in some applications, is expanding into more savoury snacks and iced beverages, in addition to traditional uses in baked goods and hot drinks.” 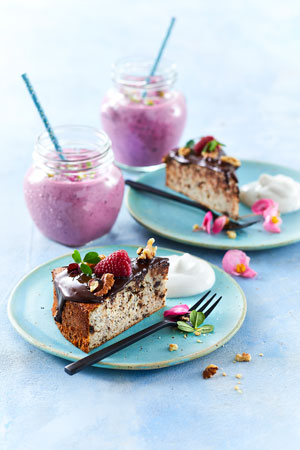 Ghazalay says the US Dairy Export Council has been actively engaged in ideating innovative recipe and product formulations, sometimes partnering with institutions such as the Food Innovation and Resource Centre at Singapore Polytechnic, to launch products such as beverages combining whey protein with locally popular fruit flavours such as lychee, soursop and mangosteen.

Also ensuring that some customers stick with dairy, rather than seek dairy-alternatives they are not familiar with, is the negative backlash to some plant-based products. Austrian company HAMA Foodservice, which is behind QimiQ, an award-winning and sustainably produced dairy product consisting of 99 percent light cream and 1 percent gelatin that is used by chefs and in large-scale food creation around the world, points out that some plant-based dairy alternatives have a poor image.

“Palm oil and coconut oil [which are sometimes used in dairy alternatives] have received bad press lately due to the massive negative impact on the world’s forests and the corresponding effect on local populations,” says Dr Michael Gutternig, Marketing Director at QimiQ.

“Through the sustainability issue focusing on palm oil, enquiries about QimiQ products have increased dramatically. Many large companies have had to strengthen corporate social responsibility, including in the kitchen, and chefs have been given clear guidelines to use only sustainable products.”

A time for Cheese