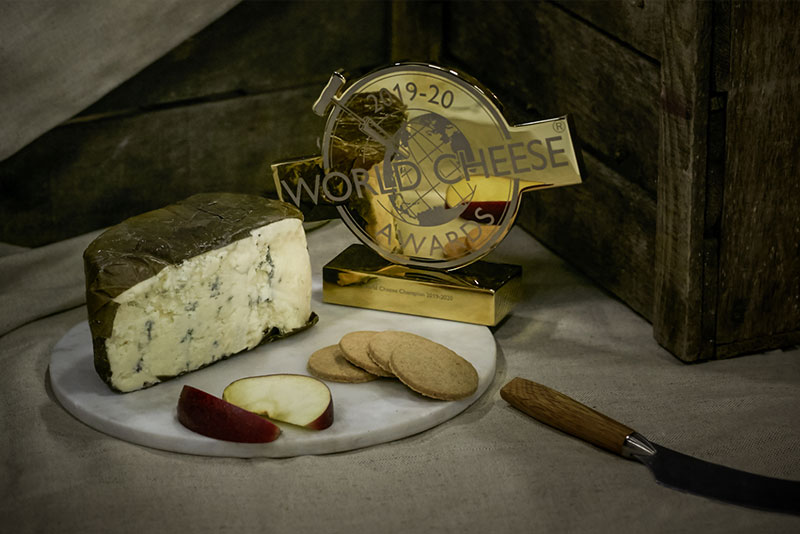 Made annually with organic cow’s milk from Southern Oregon’s Rogue Valley, Rogue River Blue is cave-aged for nine to 11 months and hand-wrapped in organic Syrah grape leaves that have been soaked in pear liqueur. The cheese was championed on the International Super Jury by Brazilian judge, Bruno Cabral, who described Rogue River Blue as a “taste party”, applauding its “different sensations, balance, sweet and spicy notes”.

At the end of the final judging stage, this unique blue cheese was level with a 24-month aged Nazionale del Parmigiano Reggiano Latteria Sociale Santo Stefano on 100 points, leaving it to the Chairman of the Judging Panel, food broadcaster Nigel Barden, to give the casting vote. In third place with 92 points was a raw ewe’s milk cheese from Spain, Torta del Casar D.O.P. Virgen Del Prado made by Queseria Doña Francisca S.L.

Taking place in Italy for the first time in its 32-year history, the largest cheese-only competition on the planet was hosted by Bergamo’s annual FORME cheese festival and a new dairy trade show, B2Cheese.

John Farrand, managing director of the Guild of Fine Food, organisers of the World Cheese Awards, comments, “This year’s top prize was almost too close to call and I would like to congratulate both Rogue Creamery and Nazionale del Parmigiano Reggiano Latteria Sociale Santo Stefano for going the distance and providing us with one of the most dramatic finales in World Cheese history. These two wonderfully different cheeses say so much about the quality and diversity of cheesemaking today; one bold and ground-breaking, the other steeped in tradition, but both hitting all the high notes with our judges. Rogue Creamery has been at the forefront of the US artisan cheese revolution for some years, so it seems very fitting for them to be the first American winners of our World Champion Cheese trophy. I’d like to thank our partners, FORME and the inaugural B2Cheese trade show, for helping us to stage one of the biggest cheese events the world has ever seen, as we continue our mission to shine a spotlight on artisan cheesemakers across the globe.”

David Gremmels, owner of Rogue Creamery, adds, “I am humbled and filled with gratitude. It has been nearly 16 years since Rogue River Blue was recognized at the World Cheese Awards in 2003. As a result, I worked with regulators, legislators and side-by-side with the USA Cheese Guildcreating the first raw milk cheese health certificate and now Rogue River Blue is amongst other American cheeses like Pleasant Ridge Reserve and Harbison that can be found in fine cheese shops and restaurants in Europe, Australia, Japan and around the globe.”

More nations than ever before were represented at this year’s World Cheese Awards, as cheesemakers from 42 countries in six continents sent their entries by boat, truck, train and plane. All entries were judged in a single day, as 260 experts from 35 different countries assessed their appearance, texture, aroma and flavour, giving Bronze, Silver, Gold and Super Gold awards to worthy winners. (Picture credit: Tim Johnston Photography)