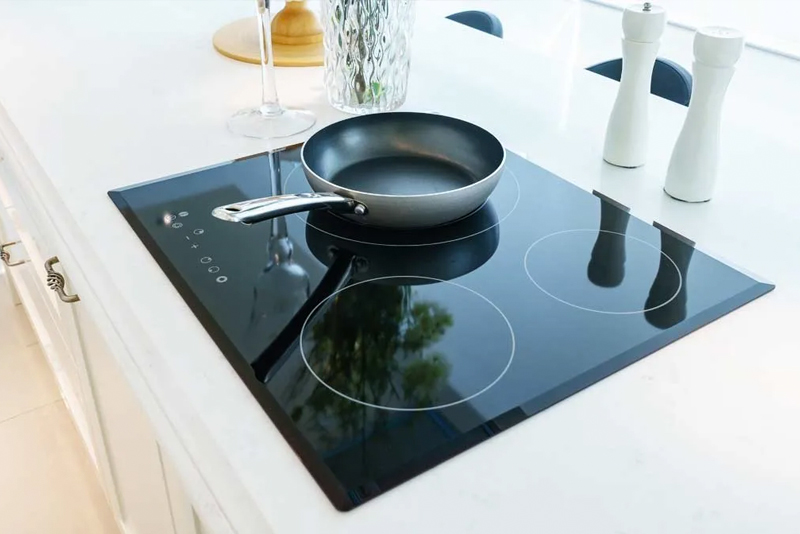 Time and safety are two major concerns in all commercial kitchens, and if the advocates are to be believed – induction cookers have both covered.

To understand why induction is gaining traction is to understand how induction heat works. When turned on, an electric current runs through a coil that sits beneath the cooking surface. That coil generates a magnetic field, but it does not heat the burner. It’s only when a pan is placed on to the burner, that the magnetic field creates small electric currents in the metal of the pan.

Two litres of water may be brought to a boil in less than two minutes.

Proponents say induction heat is easier to control than other energy forms such as gas, making it less likely food will be overcooked… or undercooked; time is saved, precise cooking easier to achieve.

And, with just a swipe of a cloth the cooktop is clean – ask any kitchen hand at midnight how enticing that thought is!

Contrary to popular belief, induction cooktops can get hot, but the heat is transferred from the glass to the pot through conduction, much like a hot dish transferring heat to a countertop if set down to rest. The conductive heat means the glass surface doesn’t get as hot as a traditional (gas or electric) range.

Additionally, if an induction burner is turned on with no pan it won’t get hot. A handy safety feature in a busy kitchen.

However, because the electromagnetic field on an induction cooktop doesn’t create a glow users may not know it’s on. With this in mind, manufacturers have started adding virtual flames and other lighting cues as extra safety precautions.

Hunter Reynolds, CFSP, business development manager Asia Pacific for Küppersbusch, says: “Induction has been widely adopted now due to gas being seen as dirty and unsafe.

“The level of recognition for induction is probably over 90 per cent, and the market share is rising steadily.”

A distinct advantage of induction cookers is their ability to rapidly supply energy. If energy is needed – when a pot is on the stove – the heat comes up immediately.

“Induction technology completely does away with the long and tedious warm-up times of conventional cookers. When the pot is again removed from the cooker, the heat dissipates at once,” says Reynolds.

In addition to food preparation: “More and more hotels now use built-in induction cookers for warming food,” Sunnex’s Ellie Gao points out. “Induction chafers improve the look of food display, are easy to clean, safe (an important aspect at public buffets) and, with no carbon emisions, are environmentally friendly.”

Induction cooktops adapt to the size of the pan whether it’s a small pot, a large frying pan, or a wide griddle. This means cooking times can be perfectly co-ordinated.

“With the combination of induction technology and electric pot detection, the energy only flows to where the pot or pan is actually in use – the efficiency level is over 90 per cent,” Reynolds says.

And, as there is no need for an exhaust fan there is greater flexibility around kitchen design, too.

And now for the Cons

Two recurring arguments against induction technology relate to the high acquisition cost and the supposed fragility of the cooker surface.

Gao concedes price is a key issue in the catering industry. “But, we pride ourselves on value-for-money. We treat our price as a competitive advantage, instead of a problem.”

“The perception that induction is expensive is in my opinion very short-sighted,” Reynolds says. “The initial cost of the equipment is higher however the running costs are less. As a chef I know that gas units in the kitchen can be left burning all day because users believe it saves time in lighting and because of slow heat up times. The solution is induction – it is instant, it is cleaner and most importantly when you take the pan off it stops!

“Due to steadily rising energy prices users really have to choose equipment that offers excellent performance as well as fast, cost-efficient operation. All the energy used goes only into cooking, nothing else.”

While the fragility of induction cookers is “a rumour for which there is no evidence,” Reynolds says. “Professional kitchens have been using glass ceramic for over 25 years. Glass breakage due to improper handling is very rare.”

On the other hand, the benefits of glass ceramic – easy cleaning, acid and alkali resistance, durability even against high temperatures – are apparent in induction technology.

ABOUT US
The magazine provides in-depth coverage of industry news and views, food and beverage trends, state-of-the-art technology systems, new restaurant and hotel design concepts, and the latest innovative products in the market, Asian Hotel & Catering Times is the most effective way to reach the industry’s most influential decision makers.
FOLLOW US
© 2018 Asian Hotel & Catering Times
MORE STORIES
Equipment

A pizza the action